Saying goodbye to an old friend

Today I received word from my mom that my beloved friend Bubba the box turtle had died.

Bubba and I went way back. Fourteen years in fact. That summer I got my first real mountain bike, a Schwinn Moab 3. One day I was riding through the spillway below the damn at Tuttle Creek Lake. A flood three years earlier gouged millions of years of soil and rock from the surface of the spillway, leaving behind the bare bedrock that once formed the sandy bottom of a giant inland sea during the Permian Period. The terraced surface of which was now a perfect place for a 14-year-old wanna be mountain biker to ride.

Our paths crossed as my front tire rolled over his shell, sending him tumbling sideways.

I picked him up and dusted him off, noting that he had a small chip on the back of his shell but was none the worse for our encounter. Rather than set him upright and allow him to continue doing, whatever turtles do... I dubbed him 'Bubba' and promptly stuck him in my jersey pocket. Not one release any reptile or amphibian I found, I decided to bring him home and cordon off a 10' x10' section of our backyard which would become my turtle nature preserve and his new home.

Bubba seemed quite content with his surroundings. He would even come when called — knowing there was a worm or strawberry to be had by making an appearance.  In the winters he was housed in a small box in the basement, where he would hibernate until it was warm enough to return to his summer residence.

He was fully grown when I ran him over in 1996 and lived quite happily in captivity for 14 more years. Not a bad life for a turtle.

Logged on to blogger today to find a myriad of new and exciting options for me to play around with. Maybe it will motivate me to post regularly though I doubt it. All work and no play has definitely been taking it's toll on my riding and racing. Without further ado here is my mid-season race recap:

Bonebender 3/6 Hour -- 2nd 6 hour solo singlespeed, 11th overall.
Despite the threat of rainy weather that comes with putting on an April race, conditions could not have been better. I like my trails like I like my women — fast and tacky.

Syllamo's Revenge -- 6th U29, 9th singlespeed, 36th overall
In spite of the torrential downpour and threat of impending tornado-deth, the Bad Goats had a good showing. Can't say I cared much for the trail — bench cut trail section mile 14 look and rode just like bench cut trail section mile 40. Would it have killed somebody to trim the trail back? Because those briars almost killed me.

Robidoux Roundup -- 3rd Cat 1 Men, 19-29
I intended to race marathon only to arrive just as the marathon class was lining up. Expert it was!


Dirty Kanza -- DID NOT FINISH (for the third freaking time)
I raced the inaugural DK200 in 2006 and finished 5th. Each subsequent attempt has been met with fail. This year I thought I had it in the bag. My legs felt great, my nutrition and hydration strategies were spot on. Even the extreme heat was not bothering me. But I choose my tires poorly; Hutchinson Piranhas are too soft and fragile for 200 miles of Kansas gravel.  On the upside, I was able to cover the event for Dirt Rag Magazine. Look for my write up in issue #151.

I spent last week in Cali, Morgan Hill to be precise.

I had the chance to test some new products, hangout with some cool people and I even learned a thing or two. 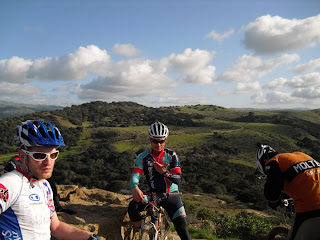 On Thursday we rode the Sea Otter race course. I was most definitely feeling the effects of our long Kansas winter.

"Trail conditions" were less than ideal. I use quotes because anyone who has ridden or raced at Laguna Seca knows it's more dirt road and double track than actual trail. An abnormally wet winter brought much needed rain, but also created giant sinkholes and axle-deep ruts in many places.

Coming off a water bar on the first descent I managed to maneuver out of harms way, narrowly missing a man-eater of a sinkhole.  One of my buddies, a known Team Segal nerdowell, was not so lucky — he rode straight in, crashed in spectacular fashion and came away with a broken collar bone.

My 2009 'cross season ended abruptly due to a dislocated patella from Barnyard Cross.

The dislocated knee cap was a result of "dropping it like it's hot" whilst dancing after Barnyard Cross. It would serve me well to remember I am no longer a kid — when I dance, there will be consequences.

In any case, I've been doing my best to get healthy over these long winter months. I haven't been able to log as many base miles would have liked, but I did manage to secure two things that will motivate me to get in race shape.

The first is a transfer entry to Ouachita. This year's registration filled up in the blink of an eye and I missed it.

The second is this: 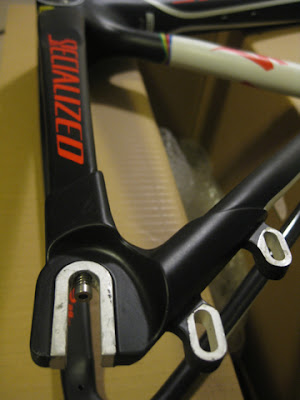 It weighs 2.6 lbs and is made of something the engineers at NASA are referring to as "carpet fiber."
Posted by Josh at Thursday, March 11, 2010 No comments:

Midwest Mountain bike racing is back!

This just in from the United Federation of Dirt. Please help spread the word!

KANSAS CITY, MO:  We are thrilled to announce the 2010 United Federation of Dirt [UFD] race calendar. The UFD consists of a
collective group of promoters, trail builders and racers unified in the goal of bringing dirt lovin’ good times to the Missouri and
Kansas region.

For 2010, we are promoting 17 traditional cross country mountain bike races divided into two leagues.  The Eastern League is
comprised of 8 races and the Western League will be hosting 9 races.  The Endurance League brings together 4 races focused on
long distance and the ability for the human spirit to suffer. The events will take place on some the best singletrack that the
region has to offer, including the ever popular Castlewood State Park, Spanish Lake, Wilson Lake, KS and newly minted Swope
Park.

In addition to the 17 cross country races and 4 endurance races, we are pleased to announce the return of the Short Track Dirt
Crit Series to the St. Louis area and the Kansas City region.  These weekly training races will be the perfect way to keep the legs
a moving and the body acclimated to racing on dirt.

And lastly, the UFD is proud to announce that these events will be under the sanctioning of USA Cycling. This is just the
beginning of many exciting things to come for the 2010 season.  We are still in the early planning stages and working to get all
the pieces in place to bring you the best racing experience around.  Look for more announcements soon…fun in the dirt is what
it is all about.

Got this video from Jesse Antony.

I think Trebon and Wicknasty steal the show.